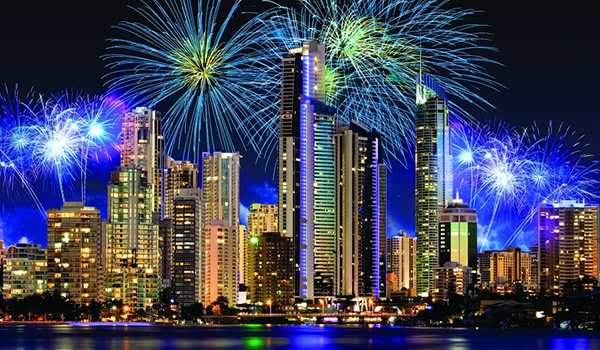 New Years at Surfers Paradise will be one of Queensland’s largest fireworks display.

More than 10,000 fireworks spread across the sand and a new sound component with fireworks synchronised to the beat of music at 9pm (9 minute show) and midnight (12 minute show).

Children are encouraged to express their ‘inner hero’ and come dressed as their favourite superhero for the 9pm family fireworks. Share your Gold Coast Kids superhero photos from the Surfers Paradise event at info@goldcoastkids.com.au

Other activities include street performers, buskers, and entertainers.

New Year’s Eve at Robina will have the Continuum Band performing, with roving balloon twisters, and fire twirlers between 6pm and 10pm. The Aerial Angels team will perform their skills and ring shows at various times from 6:40pm to 9:45pm. Family Fireworks at 9pm.

New Year’s Eve at Paradise Point offers entertainment and fun for the family. Fireworks at 9pm.

If you are heading to Brisbane for New Years, Brisbane Kids have all the New Years Eve family friendly celebrations covered.

I asked you on Facebook what you like to do on New Years on the Gold Coast. This is what you said:

Annie: Sitting on a hill and watching the fireworks from Broadbeach or surfers. it’s beautiful!

Jessi: Sleeping. Hahah… We never do anything for NYE.

Dawn: bbq at home with the kids & friends

Debbie: I think this year we are going to do a pure “our family” thing. Take 3 kiddies to an afternoon movie and than our favorite dinner “Indian” some sparklers and than fire works.

Serena: I went to Caloundra once, they had kids fireworks on the beach earlier (8.30 think) then another set at midnight for adults. The kids loved it!!!Would be nice to know if Gold Coast does this anywhere too?

Tracey: Its always great at the early fireworks at mooloolabah. Xx

Natalie: Broadwater nye party and fireworks at 9pm for kiddies

Tracey: Paradise Point has fireworks at 9pm and entertainment from around 6pm.

Valma: Probably the beach at Narrow-neck with friends and family.

Darren: Fireworks at Coomera in the park, with live band and carnival rides.