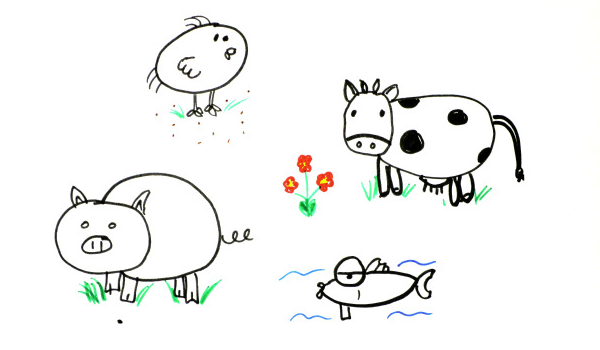 Everybody knows that kids are curious. So, it is pretty reasonable to expect that children will, at some point, want to know about where their food comes from. It’s easy to tell a child that an apple comes from a tree, or to show them that a tomato grows on a bush… But what about when a child asks where a chicken nugget comes from?

My husband and I were both vegetarians for many years before having children. I had been vegetarian and sometimes vegan for nearly my entire life and was raised that way. So, naturally, when we had kids, they adopted a plant-based diet, by matter of default. They have never tasted meat. They have occasionally eaten dairy, but lately, we’ve gone vegan, so dairy is out too. At first, I was a little hesitant to explain to my 3 1/2 year old that mum and dad had decided to stop eating dairy. Can you guess that her favourite sweet was ice cream? The past few months, we have been gently telling her that mummy and daddy have decided to stop eating dairy and the reasons why. To my surprise, not only has she jumped on the band wagon with us, but she’s done so with a lot of pride!

Dealing With Outside Influences

If vegetarian or vegan kids never went beyond the house, they would have almost no exposure to what the rest of the world was eating. But, eventually, your child will be in situations where they are exposed to what other people are eating. They might see it at daycare, school, at a party, with friends or family, or even just a visit to the grocery store. If your child has a true allergy, you will know the importance of telling your child what foods to avoid and why they can’t eat them. But, what about when a child is not really ‘allergic‘ to something, rather, they are avoiding foods by choice?

Don’t Be Afraid to Tell Them the Truth!

Kids are smart and they have a right to know where their food comes from. Many times a child will ask where their food comes from, but the parent is not so willing to explain to them how their dinner got onto their plate if the parents don’t want their kids to think about cruelty towards animals. But, lying to a child or just telling them ‘not to worry about it‘, is doing a great disservice towards them. They have the right to know about their world. We want our kids to grow up making conscientious choices and to know the consequences of their actions, right? So, why not start educating them about their food choices from an early age. Kids are very intuitive and in tune with their bodies. They will let you know what is ok with them and what is not.

Gentle Ways of Teaching Your Child

To educate a child about eating meat and dairy, you don’t have to go onto youtube and show them graphic videos or tell them gory details of what goes on in a slaughter house or dairy farm. You can tell them in simple language, that they will understand.

For example, we walked past the fish market one day, when my older daughter was 2 1/2. She wanted to know why all the fish were just sitting there on crushed ice. So, I explained to her that they were dead, and that they can’t move or see anymore because people killed them for food. She was very concerned that they couldn’t see anymore and that they were ‘ill-ed’ (killed). (You might find that kids come up with very cute ways of verbalizing their understanding of this stuff). She was shocked that anyone would want to kill a fish to eat it because then it couldn’t see anymore. While she was a little upset at the time, she had a greater long term understanding of what was happening because I explained it to her in a way that she could understand. Her sadness over the matter, later turned into a more strong conviction that she didn’t want to eat things that ‘couldn’t see‘ anymore.

Teach them through drawings and stories. Most recently, I drew a little comic strip about where dairy comes from. I drew a few funny pictures of a mummy cow and a baby cow and how the baby cow gets separated from the mummy cow and can’t drink any milk from the mummy and how people take the milk and use it to make things like ice cream. They were crudely drawn, but my daughter loved them anyway because they came from me. Since my daughter, herself, is still breastfed, along with her little sister, the whole ‘not able to drink mummy’s milk‘ thing really struck a chord with her. She new EXACTLY how sad the baby cow would feel because, she thought about how sad SHE would feel if she couldn’t have mummy’s milk anymore.

Let them take ownership of their decisions

Dictating what a young child can eat is relatively easy, especially if they’re with you all the time. But, there comes a time in every child’s life when they will want to explore and push every idealogical boundary in their lives. The boundary pushing can go in both directions! Some vegetarian or vegan children may want to explore with meat and dairy, while some kids who are meat eaters, may all of a sudden decide that they don’t want to eat animal products anymore. In my opinion, and from my experience, it’s really best if we can do our best to educate our children and then let them make informed decisions on their own.

I was raised a vegetarian and was probably one of only a very few kids in my entire school who didn’t eat meat. Although we were mostly vegetarian at home, my parents were pretty relaxed with what I ate when I was out of the house. I surely did want to experiment and ‘see‘ what the other kids were eating, so I did eat meat for a few years of my life. But, then I stopped. The decision to stop eating meat came from within. Yes, my parents guided me, but ultimately, the choice had to come from me.

I know that it is a possibility that one day my kids may want to try meat or dairy. All that I can do, as a parent, is educate my kids on how eating certain foods will make them feel. I can bring awareness to them about how their dietary choices affect the planet and living beings. I can also use the ‘not in my house‘ approach. But, I don’t want to push to hard. When a child is supported with love and skillfully educated to make choices on their own, I think they will, more often than not, make the decisions that are right for them.

Disclaimer: this post is merely meant to serve as an ethical conversation guide. If you decide to raise your child vegetarian or vegan, be sure to first fully understand the nutritional requirements of doing so.

About Kate: Kate is a mum of two living on the southern end of the Gold Coast.  She is a school teacher by profession, but currently stays at home with her children.  She writes a blog with topics covering all aspects of gentle parenting, including: breastfeeding, babywearing, elimination communication, vegan recipes and more.  Visit http://katesurfs.worpress.com for more.