It’s not everyday you hear the words “listen mummy, the stroller is making music!” Now there’s no fancy battery-operated music on my cheap stroller so I asked my daughter, Eden, what she meant. She replied, “the stroller’s going SQUEAK, bump, bump, bump… SQUEAK, bump, bump, bump”. I realised at this point why I’m so passionate Kindermusik – it’s way more than just a weekly class, it helps to bring music into children’s lives everywhere they go! Eden is now 5 years of age and what I love the most is seeing the confidence she now has in her creativity and the way she expresses music, whether it’s making up her own songs or belting out her rendition “Let it Go!”

But my daughter isn’t the only child I’ve seen flourish under Kindermusik. There are so many, including Yuliya Stachurski who started Kindermusik nearly 4 years ago when she was just 4 months old. She was a bright-eyed little girl, into everything, so in need of further stimulation her mother, Claire, contacted me about Kindermusik classes.

“I have seen Yuliya take to Kindermusik with excitement and enthusiasm. From the very beginning she loved the classes and the Home CDs are a must on car trips! We often found her using the rhythms, beats and tunes from her favourite songs each term.”

“She has made so many friends from Kindermusik. When they catch up outside of class we often see Kindermusik elements in their play. I attribute much of Yuliya’s eloquent, descriptive and broad vocabulary to her exposure to regular music education from a young age.”

“For me, choosing Kindermusik was a simple choice as our family loves music. I saw the program as a fun way to expose Yuliya to a wide range of musical concepts, not just the top 40 on the car radio! She sings along to as much classical music as children’s rhymes and other songs. I have been able to connect with families in our area who I wouldn’t have met elsewhere and, especially in those early years, that was invaluable.

“Yuliya’s favourite part of Kindermusik is all the singing. She sings ALL THE TIME!!! She also loves the balls and making up “ta ta ta ti-ti” rhythms using her take-home musical note pack which is now up on our fridge.”

“Miss Danni creates a beautiful, nurturing environment with so many added benefits for child development as well as some social interaction with other mums. I couldn’t have wished for a better experience for Yuliya or me.

If you are interested in expanding the music in your child’s life, contact Danielle Warwick on 0423210949 or visit kindermusikwithdanielle.com.au. Classes are held in Ashmore and Tamborine Mountain. 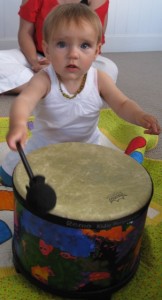 Yuliya, 1 year of age playing the drum in class

Yuliya, 3 years of age dancing with scarves in class