Earlier this week I read a wonderful blog post on Bonjour Berry about a bubble train the author (Corinne) created at home for her son’s birthday party. I messaged Corinne straight away and asked if I could share her creation on Gold Coast Kids. Thank you for saying yes!

Six months ago I got an email from a Mum whose son was about to turn 2. She asked if I would create a custom invitation design for her. Her son was train mad all thanks to one little blue engine who graces our TV screens so often.

She wanted an invitation with a little blue engine that would please both her son and herself without having to jump on the merchandising bandwagon.

About a month ago I found myself in exactly the same position and I was very grateful I had already designed the invitation. There was no question about the theme for his birthday party this year. A year ago when he turned one I had all the creative license in the world. He wasn’t particularly fixated on any one thing. Ok he was fixated on ceiling fans and chewing on my keys but that would have made for a strange party so I chose a fox theme instead.

This year choo choo’s are all consuming. We went to visit steam engines, we read books about steam engines, we play with train toys and any long line on the ground gets turned into an imaginary train track. I’d seen a few cardboard trains on blogs that parents had put together for their kids and thought it would make a fun addition to his party. I emailed some photo’s to my husband and he put his engineering skills to good use constructing a good looking choo choo for the party. Somewhere in the process I decided the whole thing would be even more fun if we could get the train to blow bubbles from the funnel. “A bubble train, what would be more fun than a bubble train!” I exclaimed. The suggestion was met with some eye rolling but kudos to the man – he found a funnel to fit my bubble machine and the idea was all go. 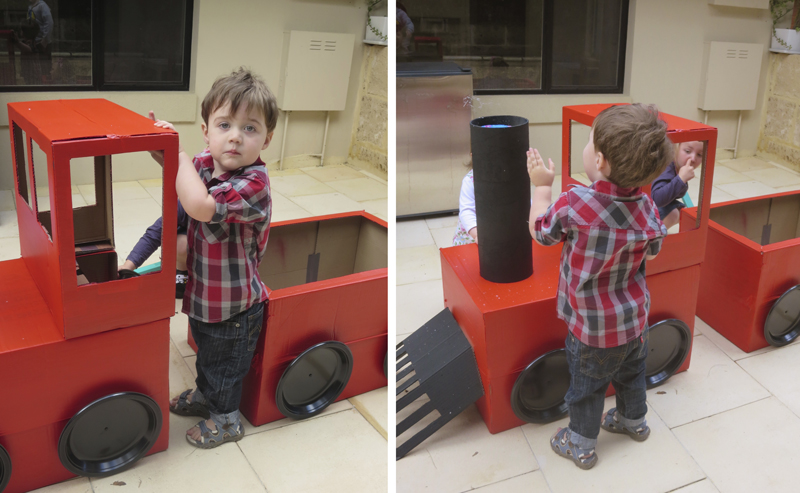 If you have a little train obsessed boy (or girl) and would like to make one of these yourself, here’s how we did it.

For a train with one carriage you will need: 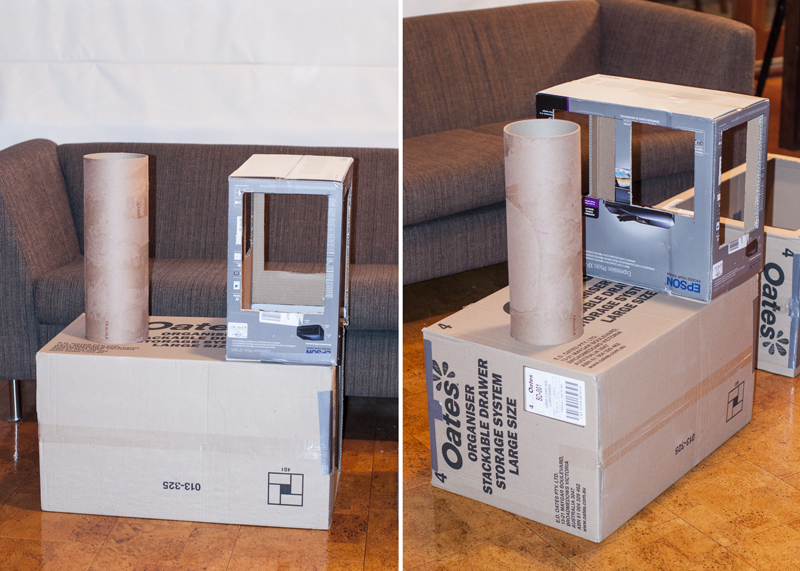 Here’s what it looks like underneath that shiny red coat of paint. Building a bubble train.

1. Basically you need to tape up all the sides of your large boxes. For the carriage simply cut a hole in the top. For the front engine you need to cut a hole out of the back. Place your smaller box on top and cut windows in the front and sides. We found having two smaller windows at the front gave more structure and strength than simply cutting out one large window.

2. As you can see in the top photo we also cut out the bottom of the smaller box and part of the large box so you could step right into the train and peep out of the windows. This was pretty popular with the kids and my son had a great time standing in there and “driving” the train. You can hold the two pieces together either with heavy duty tape or some large bulldog clips but it’s easier to do that after you have painted everything.

3. Find a good spot for your funnel and trace around it then cut it out with a stanley knife.

4. To build the grille for the train you need a flat piece of cardboard. Cut out a shape similar to the one below. You need to fold down two flaps in the top corners because you will use these to attach the grille to the train. 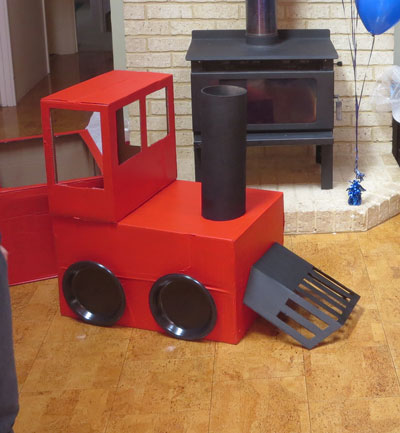 5. It’s time to paint! We used black spray paint for the funnel and grille. The train body and carriage was painted in red. We bought a sample pot of paint and this was enough to do two coats on the whole train.

7.  Use some super glue to stick your black plastic plates in place for the wheels.

8.  Lastly you’ll need to fit the funnel with a type of sling to hold the bubble blower. Get some heavy duty tape and create a cross in the funnel at the right height as shown below. When your ready to go, fill up your bubble machine and turn it on and then slide it into the funnel.

Corinne from Bonjour Berry is a stationary designer and illustrator. Corinne blogs about invitations, party ideas and DIY.