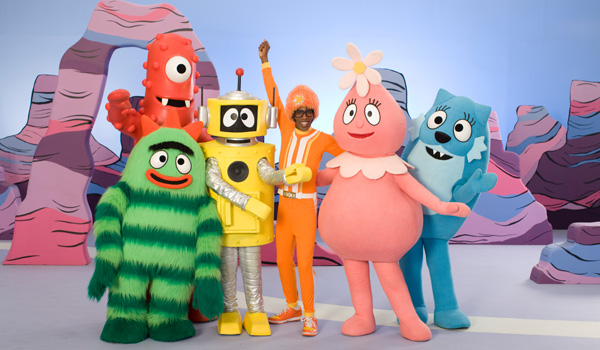 Chugg Entertainment and Life Like Touring are excited to bring DJ Lance Rock back to Australia in June. YO GABBA GABBA! LIVE! has become a cult-family-favourite seen by almost 100,000 Australians since 2009, and this year DJ Lance Rock and the Yo Gabba Gabba! gang will perform the show once again in Sydney, Melbourne and Brisbane, and for the first time ever in Adelaide, Perth and Hobart.

DJ Lance Rock and everyone’s favourite cast of colourful characters, Brobee, the little green one, Foofa, the pink flower bubble, Muno, the red Cyclops, Toodee, the blue cat-dragon and Plex, the yellow robot, take some of the all-time Gabba favourites like “I Like To Dance” and “Party In My Tummy,” and mix them up with some awesome new songs. YO GABBA GABBA! LIVE! will be familiar to many of the fans who have witnessed it before, and now fans in other parts of Australia will get to jump, shake and shimmy the sillies out too!

YO GABBA GABBA! LIVE! Super Music Friends on past Australia tours include Art vs. Science, Dappled Cities, Little Red, Operator Please and Vydamo. Past Dancey-Dance guests have included members of iconic Australian bands Powderfinger, Sneaky Sound System and Spiderbait, alongside celebrities such as David Campbell, Peter Hellier, Adam Hills, Triple J’s Tom and Alex, Nova’s Ryan Fitzgerald, Dylan Lewis, Dave Hughes and many more. YO GABBA GABBA! LIVE! marks the fourth live tour in Australia off the back of the sell-out concert series, and promises to be the biggest and best Australian tour yet.

Yo Gabba Gabba!, the DHX Media property created by Christian Jacobs and Scott Schultz, is an award-winning, live-action television series and live stage show whose unconventional formula has created a triple stacked fan base, making it one of the most popular entertainment properties among pre-schoolers, parents and indie music lovers alike. The television show, now in its fourth season, airs several times a week on Nick Jr, and at 6.30am daily on ABC for Kids.

The BAFTA award winning TV show and two time Emmy nominee has garnered a veritable Who’s Who of celebrity and musical guests including Jack Black, Chromeo, Devo, Tony Hawk, The Killers, Biz Markie, Mates of State, MGMT, Mark Mothersbaugh, The Roots, The Shins, Sugarland, The Ting Tings, Weezer and Elijah Wood to name but a few.